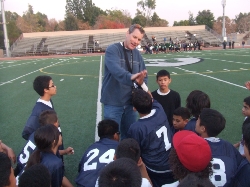 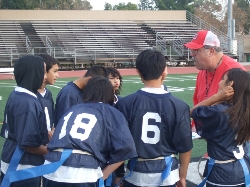 Football game Oswalt vs. Giano
Well the outcome was not what we wanted, but the learning experience was worth it.  The game was played at Nogales High School.  The field is large enough to hold our whole school.  Well it felt that way.  Nogales has a beautiful field.
Our athletes did a great job.  Giano plays hard and hits (pushes) hard.  Was this flag football?  Yes but it is still physical. Our players were a bit stunned at first but rose to the challenge.  Skinned up knees, arms that hurt, legs that were tired and smiles on everyones faces.
Heads were hung after #20 from Giano flashed by for touch down after touch down.  You had to admire his speed.  We learned that day that sometimes your not going to win.  We started yelling at one another in frustration.  Thats when team spirit started.  We briefly talked about some changes.  We agreed we did not have an answer for #20.  So lets not yell at one another.  Lets do the best we can.  We set some goals, one of which was challenge everyone to see who could stop #20.  We had two players stop him Jared and Emmanuel.  Smiles on faces.  Next goal was to get a first down and or score.  We did both when Ethan had a break out play for a touch down, which stunned Giano.  We even made the extra point.  Spirits rose some more.  We are ok we can do it, heads were not hanging they were high. A feeling of pride started.   We even passed the ball and caught it.  Wow that is hard to do at this level.
We then got another touch down and another extra point.  We look like a real football team.  We played every player with the excepting of two who are working on grades and our other quarterback Stevie who broke his collar bone in practice on Thursday.
We  now look forward to this weeks game which has been changed to Thursday.  It is at Ybarra and the field is a bit smaller.
Thank you for all the parents that came out.  It was nice looking in the stand and seeing all of you.
Thank you also Staff.  We had at least 10 or more teachers and Administrators there.
We feel very loved and will remember this experience for a long time.
Click here to see pictures video  (not as clear as link below to photo album)
http://oswaltacademy.org/apps/album/index.jsp?dir=38691&backLink=&backTitle=